The Latest in the Development of Vaughan 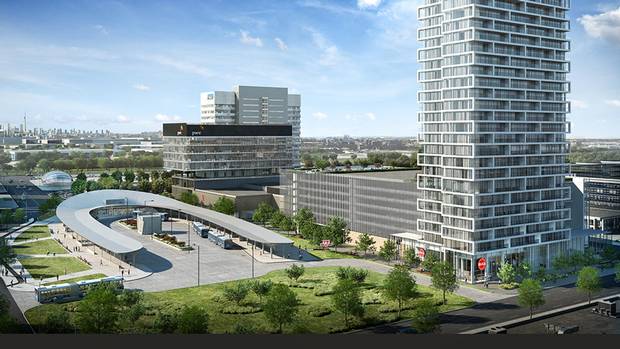 As the Toronto Transit Commission’s Spadina subway extension nears its completion, the city’s northern suburbs have taken to building up instead of spreading out.

This isn’t an ordinary development. The space the developers are working with is equivalent Toronto’s downtown core between Wellington Street and Adelaide Street and from Jarvis Street to University Avenue.

“A subdivision here would be criminal,” said CentreCourt Developments president Shamez Virani in his downtown Toronto office. “We’re unapologetic. Fifty-five stories is a big building in the downtown Toronto skyline. We’re going to send a message.”

It is one part of a master-planned 100-acre, 17-million square foot residential and office space tagged the SmartCentres Place, which aims to build 40 million square feet of density around (and above) the new University line’s extension to its Highway 7 and Jane Street intersect in Vaughan.

Now one of the largest development projects in Canada, Transit City follows a broader ongoing transformation to bring urban density to transit hubs in the Greater Toronto Area, reducing commutes and traffic.

“This transformation isn’t happening overnight and isn’t a happy circumstance of good luck; it has been a commitment and a journey towards reshaping and linking together the new downtown cores of Markham, Vaughan, Richmond Hill and Newmarket linked to transportation infrastructure backbones,” said Mary-Frances Turner, the York Region Rapid Transit Corporation’s (YRRTC) president and a former senior planner in Markham.

Transit City will include a linear nine-acre park, too. Unlike with a project such as Toronto’s planned Rail Deck park, the team at SmartCentres Place was able to design the park and build around it.

“At the Rail Deck park … you’re having to invest enormously to overcome circumstances,” said Donald Schmitt, the principal with Diamond Schmitt Architects and the lead in designing Transit City. “Master planning allows you to shape circumstances at a much lower cost.”

In the second stage of planning, the City of Vaughan pushed back to propose a central, smaller, square-shaped park. But the developers wanted one end of the kilometre-long space to connect with the other.

“We said, ‘No, let’s think big, let’s do a nine-acre park,’” said Paula Bustard, SmartREIT’s vice president of development. “Typically, that would be almost impossible to enforce in Toronto because of how many owners are there.”

“Every building is part of the urban fabric. Nothing is a silo,” she added. “We’re not going to find another parcel of land to work with like this.”

Mr. Schmitt relished the opportunity to build around social infrastructure. By the time the tower opens, the complex will already be home to a flagship YMCA community centre and a civic library.

“Nowhere else is there 100 acres, transit at the doorstep, nine-acre park, one group of ownership,” Mr. Virani said. “It won’t exist. This will be a once in a lifetime legacy type development when it’s completed.”

The land was acquired more than a decade ago, but it wasn’t until the TTC approached its coalition of developers about a subway stop that it was transformed.

“Now all of a sudden you see Transit City and it’s like ‘wow, where does that come from?’ It has come from years and years of moving in that particular direction,” Ms. Bustard said.

Building a new downtown core is about more than Transit City though.

Projects such as Transit City could enable people to live in York Region without a car, something that was previously only afforded to downtown Toronto residents, according to Mrs. Turner.

Transit City will accommodate underground parking for current demands, and the team is planning to build for ride sharing programs, but the bus-rapid transit and subway access is the focal point.

It will be the first residential development at the SmartCentres Place, joining KPMG and PwC’s new office towers. The planned 551-unit condo and others similar it will allow renters and owners to consider changing lifestyles, Mrs. Turner says.

While Transit City will offer different price points to accommodate several income brackets, there will be no studios in the building and 80 per cent of the spaces will be two-bedroom units or larger. A future phase of the SmartCentres Place project will include modern townhouses with several units.

“We could see it being anyone from a family with two or three kids to students who are sharing spaces together,” Mr. Virani said.

It will also house a Buca restaurant and bar, the first outside of downtown Toronto.

“It’s a no-brainer. It’s an honour to be asked to be part of a project of this vision,” said Peter Tseblis, a partner with Buca’s King Street Food Company. “They’re curating a downtown core. This is an incredible opportunity to be right centre ice around everything.”

Vaughan, a city built on small villages and tight-knit communities that boast 99 different languages, has come together over its new urban centre because intensification is understood, Mrs. Turner said.

The city and the YRRTC don’t have major reservations about the developers’ plans.

“For us, the direct relationship of density above and near the station is just purely a good thing,” Mrs. Turner said.

“Maybe the average home of $1.2-million in Vaughan isn’t accessible to you so you have to have different price points and many times a condo makes sense for a young couple or a young professional,” Mr. Bevilacqua said. “That creates cohesion in the city, rather than taking an urban planning approach that excludes people.”

“In my career in real estate I don’t think I’ve ever seen the province, the city, the TTC, private enterprise, public excitement, the YRRTC, everybody is agreeing and that never happens,” Mr. Virani said. “It’s unheard of. It’s so difficult in our world to even get two people on the same page.”

Now its first condo will head to market by the end of this month.